The First Ever Blog Post Not Written By Tammy!

It's Amanda - Tammy's favorite baby sister.  Paige and I were asked to blog about the adventures we had while Tam was away.  I don't blog much and Paige is sleeping so I'll try my best :)

Paige and I woke up bright and early and got the kids their medicine and breakfast and such.  Paige is extremely efficient and got the boys doing their exercises in no time.  Wyatt walks around asking for "smoo-vee" on a consistent basis.  These consist of white grape juice, spinach, wild blueberries, grapes, carrots, banana, orange, mixed frozen fruit, zucchini.. and yes, it's delicious.  Holla for Vita-mix! Anyway..

Paige and Haze took Wyatt to Brain Balance at noon, Brody and Mimi went on a pleasant early-afternoon stroll, and I accidentally fell asleep:)  Afterwards, we ate lunch.  Paige and I had grilled cheese and I was informed that it was the first time that grilled cheese sandwiches haven't ended up burnt in quite sometime.  It was then time to take Brody to Brain Balance.  Having the mini-van back saved us some travel time.  It also came bearing great gifts- i.e. Hazel's princess flip-flops which she thought were new but were actually old and she had just forgotten about them:)  We dropped off Bro and then tried to determine if we had enough time to travel to Fresh Market to pick up bacon before picking him up.  It doesn't sound like a very important errand, but trust us- it was.  We both mapped our route to the store on our iPhones and somehow still took a few wrong turns.  We were making pretty good time when traffic stopped due to some sort of a golf cart cross walk.  Despite the timing inconvenience, we loved it.


We finally got to the store and White Lightning - I mean Paige - was in n' outta there with multiple packages of organic turkey bacon within mere minutes.  We were back on the road and even arrived early to pick up Brody.  We then headed to the park and had a fun time playing.

Since Brody and Mimi went on a walk earlier, Hazel thought it was only fair for her to get to have a date with Mimi too.  Haze wanted to go to Chick-Fil-A and insisted on walking there.  We negotiated it so that I could drop them off and they could walk back after.  Paige and I were feeding the boys, and realized it had been over an hour since Hazel and Mimi had been gone.  We loaded up on the golf cart and headed out to see if we could find them and give them a ride home.  This is what we saw..

Yes.  Hazel got tired.  Mimi asked a Target employee if she could borrow a grocery cart to wheel Hazel home in.  A stranger offered them a ride multiple times. 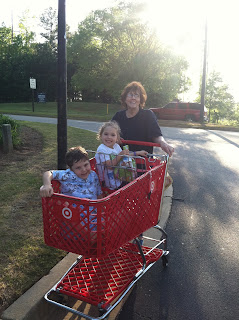 Brody wanted to hop in too and quite frankly, I don't blame him :)

We had to return the grocery cart so Paige so innovatively suggested that we tow it behind the golf cart.  So just picture 3 adults and 3 children on a golf cart towing a shopping cart across a busy road, down a hill, and through a shopping center parking lot.  Ok you don't have to imagine it because we so conveniently did a replay for the sake of capturing the priceless moment on video.  This was about the 8th take due to technical difficulties. Special thanks to Mimi for filming:)

Ha so if no one else was amused by this whole display, we sure were.

Ok so after that, Mimi so kindly watched the children so dear Paigee and I could have a night out on the town.  We whisked ourselves away on the cart (golf cart- not to be confused with grocery cart:)) for a good old fashioned GNO which included food and shopping until past the store closing time so that the employees get somewhat tense and put pressure on you to get out quick.  It's a great feeling for indecisive people like us. We finished off the night folding at least 6 batches of laundry. Woot.

Saturday!
Tammy is back!
We're so happy and are celebrating with a pizza and blogging slumber party!
Well, I'm blogging and they're distracting me. :)

Peace out!
Posted by Brain Balance Mom at 1:22 AM