Okay, so if you can believe I am exhausted again.  However - I have made a goal to not miss one day of posting so here I am!  I will just do as much as I can each night and then have to continue the next day.  Hopefully this weekend I can catch up on a lot of things that I have been wanting to post - but that may be doubtful since PAIGE IS GONE!  She is on the airplane right now and gets to see her hubby!  Their 4 year anniversary was yesterday - HAPPY ANNIVERSARY PAIGE & DRAYTON! Anyways, so I am only freaking out just a little tiny bit that I will not be able to survive!  Rephrase:  I know I can totally survive 4 days without any help, but there is NO way that I can accomplish all that needs to be done, do all the cooking, BB exercises, sensory motor activities, playing with the kids, cooking, shopping, cleaning, medicine, poop clean up (see photo above...)  So that means a lot of those things will just have to go undone and that just drives me crazy.  Let me tell you a story:

I have been whining for a week about Paige leaving.  Not because I didn't want her to go spend time with her husband and family, but just because even with both of us here working 18 hour days, we are still drowning.  There is so much to do!  So the thought of taking on all of that alone was very overwhelming - even though I consider myself one that can take on quite a bit.

So, as I was driving Brody to Brain Balance yesterday, I was on the phone with a friend describing to her how I was not sure I could handle this on my own.  Brody tapped me and said "Remember Mama, Heavenly Father won't give you anything you can't handle."  It was the cutest thing!  I immediately asked him where he learned that and he said "from you."  He was so right.  I was not going to be "alone" and I could handle it as long as I had faith and asked for help.  How sweet it was to be reminded of this by my darling 7 year old boy.  And he was right.  I had taught him that and I know it to be true, but how easy it is to forget sometimes.  I immediately felt at peace and knew right away that I would be fine this weekend "alone".  When I talked to my loving husband he also helped me realize that I was just going to have to let go and not do everything under the sun like I wanted to.  I would have to just do the most important things and the rest would just have to wait.  (Not something I am good at but I am trying)

So - here I am, all alone but excited for the weekend!  I was instructed on different types of activities and crafts that would be good to stimulate the right side of the brain so we are set up to do some of them this weekend.  We also have to go to BB twice tomorrow and Monday and hopefully get all the exercises done, cooking done, etc.

So let me finish the Brody and Hazel Updates from the last couple days and then we will see if I am awake to add anything else :)

Brody:
Hazel:
Well - Since it is 1:39 and the kids will be up by 6, I guess I will have to write the million other things I have in my brain tomorrow, and the next day and the next day.... 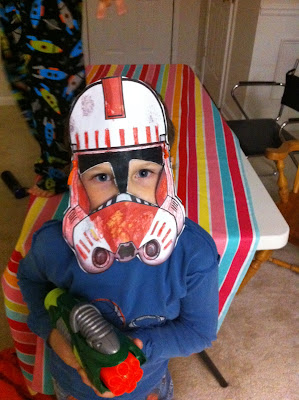 They were So exited about their paper masks!  Notice Wyatt standing on the table behind Brody.  Still happens around here, but not as much as it used to! 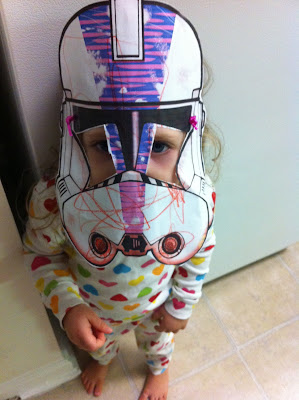 Posted by Brain Balance Mom at 1:57 AM