Today was a happy day.  All days have their happy times and some days have more hard times than others, but today was pure happiness.  Yesterday was a fun day, but not quite as happy.  Since stopping our Brain Balance sessions I had started to notice some strange behaviors from the kids (mostly Brody).  He has changed so much over this three month period it is crazy.  So - when I all of the sudden started seeing some strange behaviors or things he used to do, I must say I was quite freaked out.  When I talked to the center director and told her what was going on, she explained to me what was going on.  In short she said that once the sessions stop and the brain is no longer firing constantly,  that the brain needs time to synchronize and adjust to the changes that have gone on.  She said it is usually a roller coaster for about three weeks and then almost like a light switch, the kids go back to their new selves.

Well, the last couple of days were quite bizarre.  Brody has been more hyper, less compliant, more defiant and more emotional than he has been in over 4 months.  It is SO weird.  I am trying to be really nice and patient since I know that he can't really control what is going on, but it is still hard.  Yesterday he cried for 30 minutes because he couldn't keep his stuffed shark here and it had to go home in the car with Paige.  That is SO something he used to do and something he doesn't do at all anymore.  He is so mature, reasonable and responds typically to those situations.  Since everything Brain Balance has told me up to this point has been accurate, I am confident these behaviors will go away and Brody will be back on track in no time.

Before I get to today, let me just say that my kids were AMAZING in the car the other day.  They drove for FIFTEEN HOURS without whining, crying or complaining and with NO MOVIES!  I actually brought one movie just in case of an "emergency" and that is when I thought the drive would be 7 hours...   But we didn't even need it.  The kids read books, colored and even shared the crayons without fighting.  They really were amazing.  I think Paige and I complained more than they did :)


Today was wonderful!  I still didn't get to sleep in, but that is nothing new.  The kids were up playing by 6:30 and Wyatt woke me up with his usual request for toast and bacon.  However, his requests have changed in the last week from "Toast Bacon" to Toast and Bacon" To a totally independent "I want toast and bacon please."  Awesome!  Spontaneous sentences!

The kids played with cousins all day, we ran to Target to grab some groceries and then went to see Cars 2.  Besides Wyatt getting a little loud and silly, the kids were awesome.  They all sat nicely and watched the movie.  Hazel fell asleep for about half of it though.

We came home and had a BBQ.  The kids all sat so nicely and ate their dinner without getting up, running around or being crazy.  Loved it!

As we were cleaning up dinner I looked out the window and saw the most amazing sight! 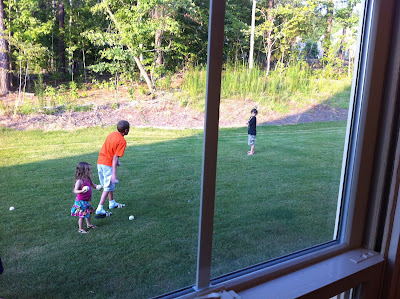 Brody was outside playing baseball with his cousins!  He never would have chosen that as his activity before Brain Balance.  He would have chosen to play with Legos, watch a movie or something along those lines.  Also, he never had the motor planning to really play sports or hit a ball, so he just stayed away from these types of things....  Not anymore!  He was outside hitting balls and I LOVED it!  I watched for 20 minutes and recorded almost every minute of it. Yahoo!

It gets better!  We thought the kids were in for the night and then I looked out the window and saw this!

Our darling little (big) boy was outside playing football!  They weren't technically playing the real rules, but they were having so much fun!  The next thing I knew they all had their shirts off.  I have just never seen Brody playing football with the boys with his shirt off - totally new and wonderful experience.  It is funny how even though I knew there were some things about Brody that weren't totally "typical",  he seemed pretty typical most of the time.  It isn't until I see things like this that I realize the things that have been missing.  The better social interaction (he was always talkative, but didn't always act socially appropriate or want to do what others wanted to do), the interest in sports and the same things as other kids his age and just basically the fact that he is acting more like an 8 year old. I can't even explain how happy this makes me.

Now on to Wyatt!  He has been talking so much lately it is amazing.  His articulation is SO much better and he is spontaneously using more words and sentences.  He is a lot more connected and when someone says Hi to him, he actually says it back!  This has all improved so much even just since he broke his leg less than 2 weeks ago.  He has also been singing songs a lot lately and sometimes I catch him just singing to himself.  This isn't entirely new because he has always loved music and loved when we sang songs, but now it is different.  He is actually singing the songs HIMSELF even with some melody to his voice.  Also, his articulation is amazing!  He used to sing and you could tell a few words, but the rest was just jibber jabber.  There is still a little of that, but these videos are amazing!  I just recorded these tonight and I was even blown away when I watched them again.  This kind of stuff really does happen overnight.  I love it and I love Brain Balance!  Really, none of this would be happening without it and I fully acknowledge that.  These are not random coincidences or gains.  These things are all happening because Brody & Wyatt's brains are changing and it is remarkable to watch.  I can't wait to see them continue to grow and change.   I will love to look back at all of these posts after Wyatt is fully conversational and Brody is the star of the football team :) and remember when Wyatt was just learning to talk and when Brody was just learning to play football in the backyard with his cousins.

Posted by Brain Balance Mom at 3:48 AM